Angkor Wat: Entry tower, part of the ring of galleried temples; this one on the central axis 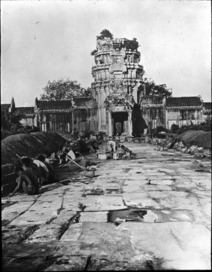