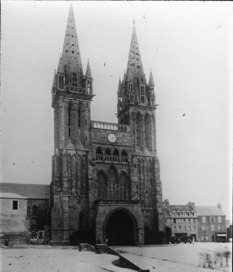 It was formerly the seat of the Bishop of Saint-Pol-de-Léon, a bishopric established in the 6th century and abolished under the Concordat of 1801, when its territory was transferred to the Diocese of Quimper. Since 1901, the cathedral is also “Basilique Mineure de l'Annonciation.” It is dedicated to its 6th century founder, the first bishop, Saint Paul Aurelian. The present building however, although on the same site, was built in the 13th century (with later additions). The cathedral was completed in the second half of the 16th century (the ambulatory and the southern chapel). The church had an ossuary (charnel house) associated with it. It is noted for its 66 carved oak choir stalls (16th century).