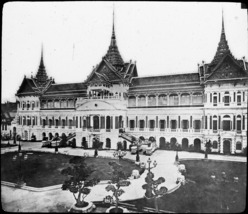 The Grand Palace (Thai: Phra Borom Maha Ratchawang, lit. The Lord’s Supreme, Great, Royal Palace) is a complex of buildings in Bangkok, Thailand. It served as the official residence of the Kings of Thailand from the 18th century onwards. The main building is the Chakri Maha Prasat, a palace begun in 1867 and completed in 1882. It has a marble façade in the Italian Renaissance style and a roof of coloured tiles in the Thai style (the plan of the British architect John Chmish was changed during the construction) with three spires, each with seven receding tiers. The rooms are decorated in a late 19th-century European manner with marble columns and hung with portraits of Thai royalty.