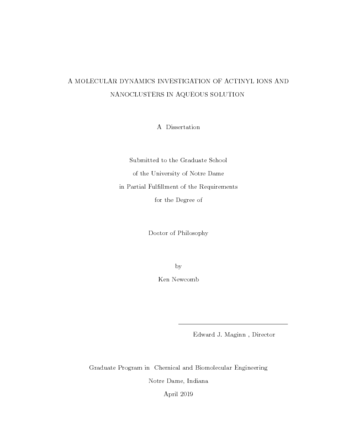 The actinides are a series of f-block inner transition metals, and are primarily used in the production of nuclear power. Nuclear power is plentiful, safe, and does not involve the emission of toxic greenhouse gases. Therefore, it has the potential to be a transitionary fuel as society moves away from the use of nonrenewable sources of energy. However, the long-term fate of nuclear waste is a major concern. Knowledge of the solution-phase thermodynamic behavior of actinides is essential for the design of advanced separation processes used to recycle the fuel. Therefore, it is important to understand and be able to control actinides at the nanoscale.

The actinides are particularly well-suited for molecular simulation studies. Due to their radioactivity, actinides present an significant experimental hazard. In addition, thermodynamic properties of important transuranic compounds like neptunium and plutonium are relatively scarce. Molecular simulation can help fill in this data gap. Finally, molecular simulation can provide an atomic-scale understanding of a chemical process that would difficult or impossible to observe experimentally. Thermophysical properties like free energies, stability constants, and diffusivities can be determined from the simulations.

Since UO2 and NpO2 are commonly found species in the nuclear fuel cycle, we first studied the complexation of these ions with a variety of ionic ligands. In the event that nuclear waste is accidentally discharged into an aquifer, knowledge of the stability of actinyl-ligand complexes would be crucial. Therefore, we first used molecular dynamics simulations to calculate the potential of mean force between two actinyl ions (UO2(2+) and NpO2(+)) and various ligands (F-, Cl-, OH-, NO3-, SO4(2-), CO3(2-), Na+, and H2O) in explicitly-modeled aqueous solution. Equilibrium constants were calculated, and are consistent with experimental trends. Dication actinyls show stronger affinity for anions compared to monocation actinyls, whereas the opposite is true for cation-cation interactions between actinyls. Finally, the dynamics of actinyl-ligand contact ion pair dissociation were characterized by calculating rate constants from transition state theory. The transmission coefficient, a dynamical correction factor used to correct for reaction barrier recrossing, was calculated for each actinyl-ligand dissociation event.

Simple actinyl ions can self-assemble in water to form nanoclusters. The nanoclusters are formed from the self-assembly of uranyl ions in aqueous solution and consist of 20-124 uranium polyhedra, with diameters ranging from 1.5 to 4.0 nm. The nanoclusters carry an overall negative charge ranging from -20 to -60, which is balanced by cations in solution. Nanoclusters have a promising future in designing advanced nuclear cycles, where they can be filtered out due to their size, thus avoiding the usage of any liquid-liquid extraction processes. This technology could considerably reduce the amount of nuclear waste for final disposal.

The nanoclusters can further assemble into tertiary structures. It was recently discovered by Burns et al. that the type of tertiary structure formed depends upon the valency of the charge-balancing cations. When neutralized with divalent cations (Ca(2+)), the nanoclusters aggregate into spherical macroassemblies known as “blackberries”, consisting of hundreds of individual nanoclusters. However, in the presence of monovalent salt (K+), the nanoclusters form elongated structures. The exact role of the cations in this process is not well understood experimentally.

We sought to accurately determine the binding sites of water and various cations (Li+, Na+, K+, Rb+, Cs+, and Ca(2+)) to the U20 nanocluster, and to better understand how the identity of the cation affects nanocluster aggregation. We first developed a new classical force field for the simulation of U20 nanoclusters in explicitly-modeled water using a combination of Lennard-Jones and Coloumb potentials. Molecular dynamics was used to determine the preferred binding sites of the cations. Replica exchange molecular dynamics was used to ensure equilibration and ultimately determine the equilibrium distribution of cations and water around the nanocluster. In addition, the free energy barrier associated with a cation entering the nanocluster was computed. Finally, the association of two U20 nanoclusters was explored by free energy calculations. The free energy of association was found to vary greatly with the valency of the charge balancing cations.

In this dissertation, solutions of actinyl ions and nanoclusters are studied using classical molecular simulation techniques. Thermodynamic properties of actinyl solutions were computed and corroborate experiments, and predictions are made where experimental data is lacking. These studies support the goal of obtaining nanoscale control of the actinides, which is crucial for the advancement of nuclear power generation, human health, and the environment.