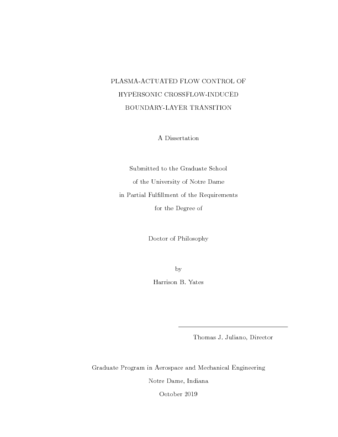 The purpose of this research was to control crossflow-induced boundary-layer transition on a cone at angle of attack in hypersonic quiet flow. A 7° half-angle cone model with interchangeable nosetips was designed and fabricated from stainless steel, polyether ether ketone (PEEK), and Macor. Transition was characterized using in- frared thermography and Kulite pressure transducers in the Boeing/AFOSR Mach-6 Quiet Tunnel at Purdue University. A plasma-based active flow-control system was used to control the transition location of the stationary crossflow waves, which manifested themselves as hot streaks on the cone. The transition location was accelerated by critical forcing (where the actuator wavenumber equals the wavenumber of naturally largest amplitude waves) and delayed by subcritical forcing (where the actuator wavenumber is larger than the natural waves). The disturbance wavenumber input of the plasma actuators was observed downstream on the model for many of the plasma-on runs, demonstrating that the plasma actuators introduced discrete forcing into the flow. The precise locations of the hot streaks varied for different nosetips, presumably due to differences in their microscale roughness.

The experimental data were used to inform an improved stability analysis. Stationary crossflow vortex N-factors were calculated over the surface of a yawed circular cone using computationally predicted and experimentally observed wavenumber distributions. A wavelet analysis was conducted on the experimental surface heat-flux data to construct a spatial mapping of the local largest amplitude wavenumbers of the stationary crossflow waves, which were between 40 and 80 per circumference. Significant spatial variation was observed. The results from the wavelet analysis informed the stability analysis. The computed integration marching directions demonstrated good agreement with the experimentally observed paths. N-factors were calculated by integrating the local amplification rate corresponding to the most amplified experimental wavenumbers. The calculations were repeated based on non-dimensional computationally varying wavenumber ratios, which were dimensionalized by the experimental data. The computed N-factors showed good agreement between the two techniques. N-factors were also computed using the computationally predicted most unstable wavenumbers. The results showed decreased agreement with the other two cases, suggesting that this assumption does not properly model the crossflow transition process.