Narratives of Power: Royal History and the Language of Legitimacy in Medieval Castile 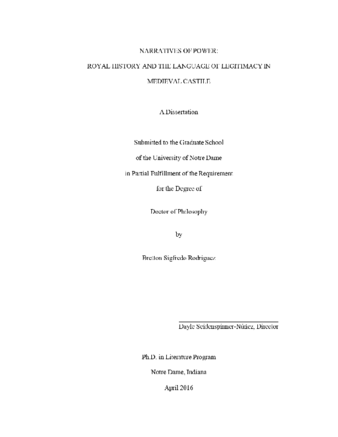 Narratives of Power: Royal History and the Language of Legitimacy in Medieval Castile offers an interdisciplinary analysis – utilizing the skills of both literary criticism and historical inquiry – of the evolution of royal history and historians in medieval Castile between the reign of Alfonso X and that of the Catholic Monarchs. To address such a large topic, it focuses on the works of three historians – Alfonso X, Pero López de Ayala, and Fernando del Pulgar – who wrote on behalf of the Castilian crown following periods of immense political and social upheaval in the thirteenth, fourteenth, and fifteenth centuries.

I argue that legitimizing political power became an increasingly critical part of historical narratives in late medieval Castile, which determined the evolution of these texts while forming a lasting connection between history and legitimacy. I also assert that royal histories evolved into a prominent literary genre as well as a space for literary innovation, helped to develop the concept of Castilian kingship, and were crucial to the construction of national identity. In addition, I illuminate the progression of the role of royal historians from anonymous scribes to prominent literary figures, and I claim that the increased importance and sophistication of royal histories led to the professionalization of writing history in medieval Castile.

Through this project, I offer a diachronic investigation of the evolution of royal history and historians over the course of more than two centuries, and I provide an in-depth analysis of the work of three of the most prominent historians of medieval Castile whose histories would not only impact contemporary ideas and values, but would also become models for historians, poets, and playwrights for centuries..