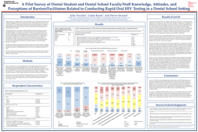 BACKGROUND In 2006, Centers for Disease Control and Prevention (CDC) issued revisions to its 2001 guidelines for HIV counseling and testing, removing the pre-test written consent and prevention counseling requirements, and expanding the role of health care providers/settings. The aim of these revisions is to increase rates of early diagnosis of HIV via the routinization of HIV testing. Despite the publication and promotion of the CDC’s revisions, and the existence of simple and safe Food and Drug Administration-approved (FDA) test kits, many fields of health care practice - including dentistry - have been slow to adopt them.

OBJECTIVE The purpose of this survey was to describe knowledge, attitudes, and perceptions of potential barriers/facilitators related to conducting rapid oral HIV testing at an urban dental school among the school’s students, faculty, and staff.

METHODS An anonymous, online survey was sent via list-serv to the University of Illinois at Chicago (UIC) College of Dentistry (COD) college-wide list-serv (n=957).

RESULTS Of the 102 surveys initiated (10.6% response rate), 83 were submitted (81% completion rate). Of the 83 respondents (54% male, 46% female), 43% reported their role at the UIC COD to be faculty, 43% indicated they were dental students (75% were DMD students, 25% were DMD Advanced Standing students). A majority of respondents (75%) “have ever provided dental care for HIV+ individuals,” 52% “have ever taken a workshop or similar educational offering related to HIV/AIDS,” and 27% “have ever participated in volunteer work with HIV+ individuals.”

Knowledge. The mean score on the knowledge component of the questionnaire was 8.37 (10 points possible) (SD 0.96). Broad knowledge of the CDC’s 2006 revised recommendations was lacking, with only 4% of respondents selecting the correct response to this question.

Attitudes. A majority of respondents did not endorse prejudicial or discriminatory attitudes (at least 69% on the 4 items). Responses to items related to stereotyping were divided: while a majority of respondents endorsed 4 items consistent with beliefs that HIV+ individuals bear responsibility for their status (62%), having knowingly (70%) engaged in risky behavior (80%) and are more at fault for their status than HIV+ individuals who acquired the virus via blood transfusion (59%), a minority of respondents (10%) thought that “HIV+ patients do not share the same values” as them, and less than half of respondents (40%) believed that “HIV+ patients tend to have numerous sexual partners.”

Perceptions of barriers/facilitators. A majority of respondents endorsed statements reflecting positive perceptions of rapid oral HIV testing as a practice “contributing to the public good” (93%), a practice on the “cutting edge” (73%), a practice that can enable “dentistry to integrate with other health professions” (92%), and “within the scope of practice of the oral health processions” (82%). However, a majority of respondents (at least 67% on all 9 items) indicated that each barrier listed would present a challenge to conducting rapid oral HIV testing in a UIC COD clinic at least “sometimes.” Cost (59%), “space for confidential communication” (50%), “clinician discomfort communicating results to patients” (51%), and “patient reactions to results” (50%) were endorsed as “often” or “always” presenting challenges by at least 50% of respondents.

CONCLUSIONS Efforts should be made to improve dissemination of the CDC’s 2006 revisions to their HIV screening recommendations - they are a significant policy document, providing rationale and guidelines for universal HIV screening, as well as outlining an expansion of the roles of health care sites in screening activities - revealing the nascent potential for oral health care fields to play an important role in early HIV detection via screening. More research is needed to understand factors influencing respondent perceptions of barriers related to conducting rapid oral HIV testing. Focus groups and semi-structured interviews may offer additional insight into perceptions of barriers, as well as provide an opportunity for discussion and exploration of potential approaches to addressing the challenges associated with implementing a pilot rapid oral HIV testing program in a UIC COD clinic.