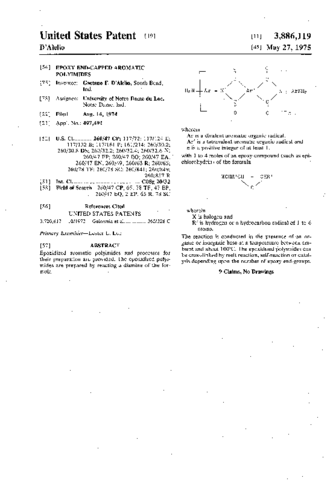 Epoxidized aromatic polyimides and processes for their preparation are provided. The epoxidized polyimides are prepared by reacting a diamine of the formula ##SPC1## Wherein Ar is a divalent aromatic organic radical, Ar’ is a tetravalent aromatic organic radical and n is a positive integer of at least 1, With 1 to 4 moles of an epoxy compound (such as epichlorohydrin) of the formula ##SPC2## Wherein X is halogen and R’ is hydrogen or a hydrocarbon radical of 1 to 6 atoms. The reaction is conducted in the presence of an organic or inorganic base at a temperature between ambient and about 100.degree.C. The epoxidized polyimides can be cross-linked by melt reaction, self-reaction or catalysis depending upon the number of epoxy end-groups.