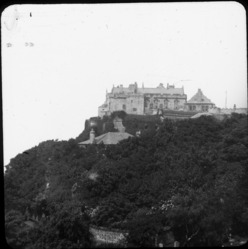 The Royal Palace (ca. 1540) is the main building visible in this view.

Castle in Central region, Scotland. It was built overlooking the River Forth at a strategically important junction of routes by both land and water, where there was the additional advantage of a high volcanic outcrop as a natural setting for the royal castle required to defend these routes. The first references to a castle are from the reign of Alexander I (reigned 1107-1124), who is known to have built a chapel there. The oldest extant building is the North Gate from ca. 1381. Architecturally the castle reached its apogee during the reigns of James IV (reigned 1488-1513), James V (reigned 1513-1542) and James VI (reigned 1576-1625). The Royal Palace was completed ca. 1542.