Analysis of Electrochemical Systems for Decomposition of Urea in Urine 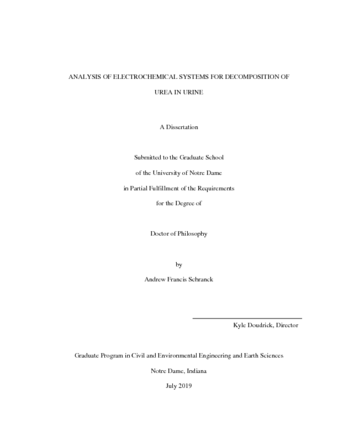 Nitrogen in urine (urine-N) represents the greatest opportunity for sustainability-driven innovations for municipal wastewater treatment. The goal of this dissertation is to present electrochemical systems that will lead to improvement of current practices for the removal of urine-N in wastewater. The research objectives were to (1) analyze inorganic electrodes for electrooxidation of urea, (2) investigate operational parameters and reactor configuration to understand their effects on electrochemical performance, electrode stability, kinetics, selectivity, and ultimately reactor selection and design, (3) explore electrode alternatives to reduce the energy cost of electrochemical treatment, and (4) develop recommendations for future investigations of electrochemical systems for nitrogen removal from wastewater to promote source-separated urine treatment technologies.

Two major barriers for implementation of electrochemical wastewater treatment include minimizing energy requirements and controlling treatment byproducts. Active-type, NiCo2O4 electrodes for electrooxidation of urea showed increased overpotential and electrode deactivation when tested in the presence of synthetic urine, specifically due to interactions of phosphate, creatinine, and gelatin constituents with the catalyst surface. The deleterious compounds revealed that urea and phosphate weakly bind to NiCo2O4 through H-bonding or long-range forces, whereas creatinine interacts strongly, forming deactivating inner-sphere complexes. Phosphate presumably disrupts the interaction between urea and NiCo2O4 by serving as a H-bond acceptor in place of catalyst sites. The weak binding of urea supports the hypothesis that it is oxidized through an indirect electron transfer.

Inactive-type BDD electrodes for electrooxidation of urea in undivided and divided reactor systems effectively decomposed urea under a broad range of pH, electrolyte, and cell configurations but presented varying decomposition kinetics and N selectivity results. While neutral and acidic pH promoted removal of urea and alkaline electrolyte minimized decomposition, separation of the electrodes with a proton exchange membrane (PEM) played the most significant role in N selectivity. Further, the presence of reactive chlorine species (RCS) produced from Cl- had a significant impact on N selectivity during electrochemical urea decomposition. In the absence of RCS the undivided reactor promoted modest initial NO3- selectivity, peaking around 20%, followed by high total ammonia nitrogen (TAN) selectivity of 65% and modest N2 selectivity of 15%. The divided reactor promoted high NO3- selectivity of over 80%, TAN less than 20%, and no N2, due to the inability of NO3- to effectively transport from anode to the cathode. Contrary to the absence of RCS, the presence of RCS produced almost 100% N2 selectivity, nominal NO3- selectivity, and no TAN selectivity in both during electrochemical urea decomposition for both undivided and divided reactors. Though RCS can produce hazardous disinfection byproducts such as ClO3- and ClO4-, RCS were very effective for electrochemical conversion of wastewater N to N2, while HO• species showed more diverse selectivity toward NO3- and TAN.

Photocatalyst and H2 producing electrode systems present two options for decreasing the energy demand of electrochemical wastewater treatment. In the former case, they can harness solar energy, and in the latter case they can be used for valorization that yields H2 as a urea electrooxidation product to fuel the treatment process through hydrogen fuel cells. BiVO4 and TiO2 are promising for their narrow band gap and proven photoactivity and power producing abilities. TiO2 still remains more effective despite wavelength limitations to the UV range. MoS2 has potential as a H2 producing cathode, but more research is still needed to produce a highly stable material for harsh electrolyte conditions.