Angkor Wat: Exterior, arcade of outer galleried temple with the quincunx of towers behind 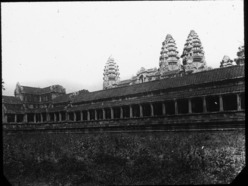 The outer gallery measures 187 by 215 m, with pavilions rather than towers at the corners. The gallery is open to the outside of the temple, with columned half-galleries extending and buttressing the structure.