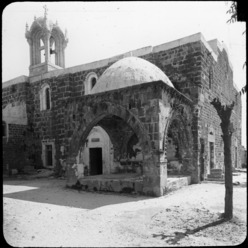 Byblos (the ancient Greek name; modern name is Jubayl) is believed by many to be the oldest continuously inhabited city in the world. Under the name of Gibelet or Giblet, it was an important military base in the crusader Kingdom of Jerusalem in the 11th and 12th century. The church of St. John was built in the Romanesque style, completed ca. 1215. Work on the church started during the crusades in 1116. It was considered a cathedral and was partially destroyed during an earthquake in 1176. It was transformed into stables by Islamic forces after the fall of the city, and was given to the Maronites as a gift by Prince Youssef Chehab of Lebanon in the mid 1700s, after they aided him in capturing the city.