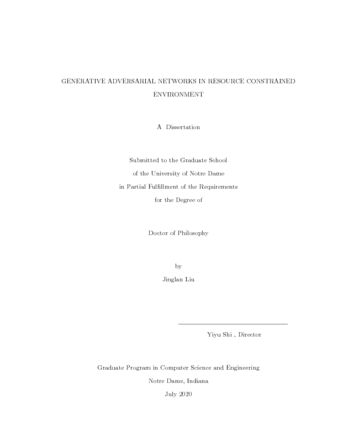 Generative Adversarial Networks (GANs) with the ability to generate samples following almost any implicit distribution have been successfully applied to a number of different applications, including image synthesis, super resolution, style transfer, image inpainting, image caption generation, etc. A GAN contains two main parts: one is the generator, and the other is the discriminator. Both are usually implemented via deep neural networks (DNNs). As a spin-off of DNNs, GANs require a large amount of resources as other DNNs, no matter in terms of physical resources like memory and computation cost, or data resources needed for training. This high resources demand hinders GANs from being widely used in various practical environments with limited resources.

This work focuses on three techniques to mitigate the high pressure from the resource demand from different aspects. The first method explores the weight binarization on GANs for memory saving and speedup of image construction on the edge, where the physical resources are quite limited. Therefore, the aim is to binarize GANs as much as possible and cost resources to the least. The study also reveals some constructive hints for more general model compression on DNNs. The second method aims to improve the performance of a GAN given resources constraints. This GAN is applied to medical image processing, where performance improvement under constrained resources will benefit patients and radiologists greatly. This study may guide further performance improvement on similar applications given constrained resources, but not only on GANs. Finally, orthogonal to the previous mitigation on the physical resource demands, data resource pressure is relieved by the third method when applying a GAN to data augmentation. Leveraging the ability of GAN generating samples from an implicit distribution delicately, it is possible to solve the problem with data resources constraints via both GANs and general DNNs. In addition, a case study applying a GAN into solving a resources constrained problem is also provided.