Borobudur: Detail, looking down from the summit at the many small stupas during restoration 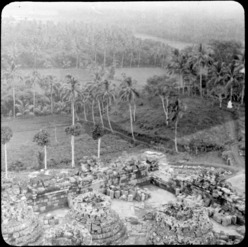 The name Bore-Budur, and thus BoroBudur, is thought to have been written by Raffles in English grammar to mean the nearby village of Bore.

Buddhist temple site discovered by the British in 1814 after having been buried in volcanic ash ca. 1000. In 1873, the first detailed monograph was published. The first photograph of the monument was taken in 1873 by a Dutch-Flemish engraver, Isidore van Kinsbergen. Restoration started ca. 1902-1911. It was constructed during the Shailendra dynasty on a hill, nine levels consisting of a base, five square terraces and three upper circular terraces. It is a virtually solid monument in the form of a stepped pyramid crowned by a stupa. The first four terrace walls are showcases for bas-relief sculptures. The bas-reliefs in Borobudur depicted many scenes of daily life in 8th century ancient Java, as well as Jataka (stories of the Buddha). Gunadharma or Gunadarma is claimed as the name of the architect of Borobudu.