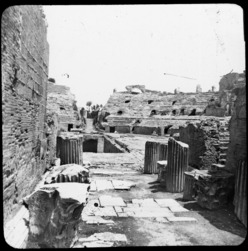 The third largest Roman amphitheater in Italy. Only the Roman Colosseum and the Capuan Amphitheater are larger. It was likely built by the same architects who previously constructed the Roman Colosseum. The name Flavian Amphitheater is primarily associated with the Roman Colosseum. It was begun under the reign of the emperor Vespasian and probably finished under the reign of his son Titus. The arena can hold up to 20,000 spectators. The interior is mostly intact and one can still see parts of gears which were used to lift cages up to the arena floor. It was in use during the martyrdom of Saint Proculus, and the patron saint of Naples, Saint Januarius in 305. It was abandoned when it was partially buried by eruptions from the Solfatara volcano. It was during the medieval period that the marble used on the exterior was stripped.