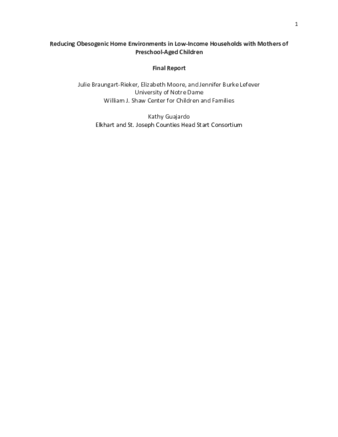 Obesity rates in the U.S. for both children and adults are alarmingly high, particularly for those in low-income households. The current project, a partnership between Elkhart and St. Joseph Counties Head Start Consortium and the University of Notre Dame’s William J. Shaw Center for Children and Families, focused on reducing obesogenic home environments for low-income families. Focusing on home environments, particularly for young children, is important because research shows that mothers are typically the nutritional gatekeepers of the family, and young children receive approximately two-thirds of their food from home. Making small changes that often go unnoticed, such as decreasing plate and cup sizes, altering how healthy food is presented, turning the TV off during mealtimes, and changing negative or ineffective patterns of parenting about children’s eating behavior could lead to reductions in calorie intake without triggering feelings of deprivation. The goals of the current study were to provide evidence that our intervention, entitled “Undercover Mother” was feasible, a positive experience, and effective in making changes (compared with a control group) in mothers’ knowledge about child nutrition and strategies for increasing fruit and vegetable intake as well as the nutritional value of the food available in the home. A total of 74 families were recruited to participate in the project from Head Start classrooms placed within Title I schools by Head Start Family and Community Specialists (FACS). Fifty families consented to participation and enrolled in the project, completing surveys, a food diary, and a food inventory in the home with a research assistant from the Shaw Center (Pre-test). They were then randomly assigned to either an intervention group (n=25) or a comparison group (n=25). Intervention families participated in two home visits with FACS and received a kit, which included items such as: small white plates to encourage smaller portion sizes; colorful silicone cups to entice children to try new foods; measuring cups to help with awareness of appropriate portions; a binder that included child-friendly healthy recipes, strategies for increasing fruit and vegetable intake, meal and grocery planning templates, nutritional information for preschool-aged children, and parenting Help! Cards for tips for dealing with common behavioral issues at meal-time and while grocery shopping. The FACS also completed two interactive presentations, slightly modified based on participant need, that explained how to use the materials and engaged the parent with the concepts. Families from both groups then completed in-home post-test measures with a research assistant from the Shaw Center. Twenty-one families completed the intervention; 100% of the intervention families reported that they would recommend Undercover Mother to others. Thus, Undercover Mother was both a feasible project and received positively by mothers. To examine the effectiveness of Undercover Mother, analyses of covariance (ANCOVAs) were conducted to compare intervention and comparison families’ post-test scores, while controlling for pre-test scores, on a variety of measures. One measure that showed significant differences by group was mothers’ knowledge of nutrition (e.g., portion sizes for children and “go, slow, whoa” foods) such that mothers in the intervention group had a significantly higher number of correct answers during the post-test than mothers in the comparison group. Other measures that tapped maternal behavior such as improving the quality of foods in the home or changing strategies for getting children to eat healthier foods did not show significant differences for the intervention vs. comparison group.