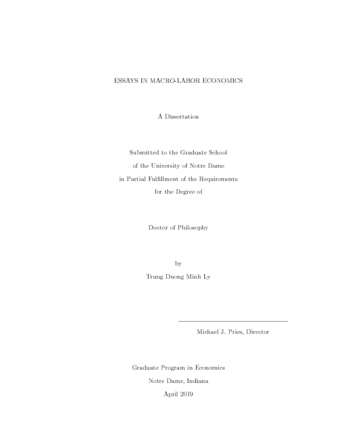 In chapter three, joint with Jan Gottschalk and Ruifeng Zhang of the International Monetary Fund, we analyze the macroeconomic effects of a public employment reduction in Bosnia and Herzegovina (BiH) whose labor market is characterized by a high level of public sector employment along with many structural problems such as a high labor income tax and rigid wages. We inspect the effect of a reduction in public sector employment on the economy under two scenarios, one of which assumes that the labor market environment remains the same where laid-off public employees cannot find work in the private sector, and another that assumes a reformed labor market where there is perfect labor mobility across the public and private sectors. Our analysis finds that under the current rigid labor market, there is a modest increase in total output, while the increase in production under the reformed labor market is much larger. We attribute this latter result to the investment boom that accompanies the increase in the supply of labor to the private sector, which results from the reduction in public sector employment.