Validation and Characterization of Host Factors for Dengue Virus in the Vector Mosquito, Aedes aegypti 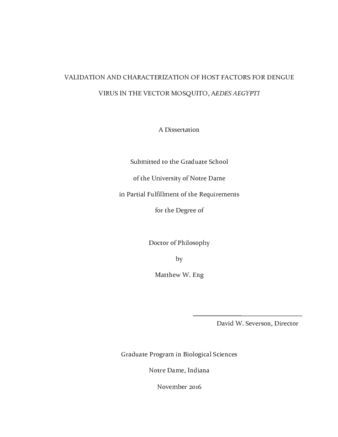 The Aedes aegypti mosquito is one of the world’s most medically-important vectors and an emerging public health threat. Ae. aegypti is the primary vector for dengue, an emerging disease which afflicts 50-100 million people annually in 128 countries. With no widely available vaccine or specific treatment for dengue, vector control is crucial to controlling its transmission. In order to develop novel methods of mosquito control, insight into interactions between host and pathogen are necessary to understand factors that lead to vector competence. This dissertation aims to elucidate the roles and functions of several of these host pathways in the context of DENV infection of Ae. aegypti. Previous work from the Severson lab demonstrated that several clusters of genes are differentially expressed between dengue virus (DENV) susceptible and refractory mosquitoes. These DENV-responsive genes included members of metabolic, apoptotic, autophagic, vacuolar transport, immune and MAPK signaling pathways. Apoptosis is a highly regulated programmed cell death pathway important for developmental and homeostasis. It is also been demonstrated as a protective mechanism against viral infection, including DENV infection in mammalian systems. Here we characterize the apoptotic pathway and its effect on DENV infection. We further demonstrate that apoptosis genes also act as regulators of the conserved cellular recycling process, autophagy, which has been previously been implicated as necessary for DENV. In parallel to the identification of viral host factors, we also evaluate the use of oral delivery of double-stranded (ds) RNAs to target genes important for DENV infection. RNA interference (RNAi) has previously been fed to agricultural pests through the feeding of dsRNAs as a bio-insecticide. We demonstrate that orally-induced RNAi can induce gene knockdown of several genes, including highly connected hub genes, which were previously identified as DENV-responsive. Knockdown of these hub genes decreases DENV infection of adult mosquitoes. This represents the first report of oral delivery of dsRNAs to successfully reduce DENV infection of adult Ae. aegypti.