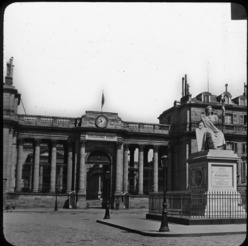 The statue is The Law by Jean-Jacques Feuchère, stone, 1854.

A former palace (maison de plaisance) located on the left bank of the Seine, which is now the seat of the French National Assembly, the lower legislative chamber of the French government. The palace was originally built for the legitimized daughter of Louis XIV, the duchesse de Bourbon, to a design by the Italian architect Lorenzo Giardini. Giardini oversaw the construction until his death in 1724, after which Jacques Gabriel V took over, assisted by L'Assurance and other designers. During the French Revolution the Palais Bourbon was nationalized, and the Council of the Five Hundred met in the palace from 1798. Under Napoleon the pedimented portico by architect Bernard Poyet was added to the front of the Palais that faces the Place de la Concorde across the Seine. The pediment was re-sculpted by Jean-Pierre Cortot ca. 1827.