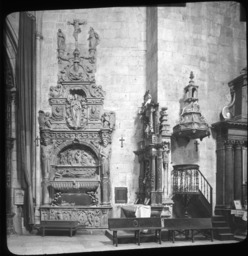 Juan de Colonia was probably brought to Spain (Castile) by Alonso de Cartagena, Bishop of Burgos, to design his sepulchral chapel, the Capilla de la Visitación (1440-1442) off the south transept in the cathedral. They may have met when Bishop Alonso attended the Council of Basle.

The foundation stone of the present building, dedicated to the Virgin, was laid by Bishop Maurice of Burgos (reigned 1217-1238) on 20 July 1221. The cathedral is indebted to the design of Bourges Cathedral. In the French High Gothic context the cathedral’s plan and elevation are old-fashioned. Since Burgos was on the pilgrimage route to Galicia, however, they make the cathedral a latter-day pilgrimage church, with its three façades, gallery and extra chapels. In the 15th and 16th centuries the building was transformed. First spires were added to the western towers between 1442 and 1458 by Juan de Colonia, then sepulchral chapels were built, and lastly the crossing was given a cimborio. A UNESCO World Heritage Site.