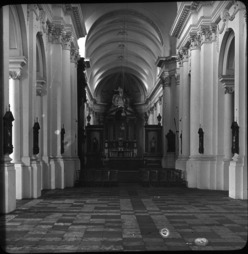 Interior view of the church belonging to the Abbey of Saint-Jean at Florennes, founded by Gerard of Florennes (ca. 975, bishop 1012-1051), bishop of Cambrai as Gerard I, with the monastic reformer Richard of Verdun in 1015. Gerard transferred the abbey to the church of Liège, so that it served the diocese of Liege and Namur, also drawing together a community of monks from Verdun. On the site, only the former abbey farm remains, on the outskirts of Florennes. The former abbey church also housed three bas-reliefs dating from 1200-1210. A triptych and the Reliquary of St. Maurus from the 13th century were saved when the abbey was destroyed in the French Revolution.