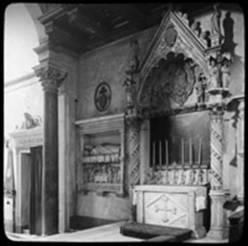 The tomb of Philippe II of Alençon. He died in Rome in 1397 and was buried in the tomb he had built for himself in Santa Maria in Trastevere. The tomb is attributed to the Florentine Giovanni d'Ambrogio. The monument was later dismantled, and its original appearance as a ciborium with altar was lost when it was converted into a wall monument. Surviving from the elaborate tomb are the recumbent figure, the reliefs of the Dormition and Assumption of the Virgin, and a series of small statuettes, some of which are now in the portico.