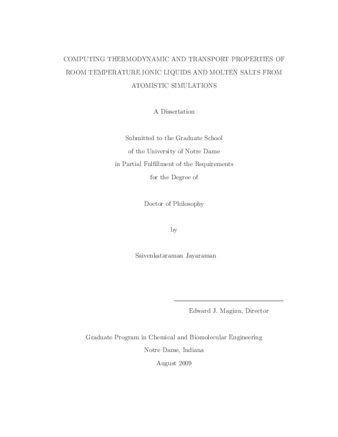 Ionic liquids and molten salts are being considered for many novel applications including for use as heat transfer fluids in thermal energy generation cycles. Thermodynamic and transport properties like melting points, heat capacities, viscosities and thermal conductvities were computed for some ionic liquids and molten salts. Melting points were computed using a novel thermodynamic integrationbased procedure. Apart from computing melting points, relative thermodynamic stabilities of crystal polymorphs can be obtained using this method. The melting point and the relative stabilities of two polymorphs of the ionic liquid 1-n-butyl- 3-methylimidazolium chloride were computed and were found to be comparable to experimental data.

Melting points were computed for lithium, sodium and potassium nitrate salts, which are being considered as candidates for heat transfer media in solar thermal applications. Viscosities, thermal conductivities and heat capacities were also computed for these salts. The numbers were comparable to experimental data. The difference between the experimentally determined properties, and the values obtained from simulations can be attributed to the parameterization of the force field model used for these salts. In addition to pure component properties, transport properties such as self-diffusivities, viscosities and thermal conductivities were computed for ionic liquid and alkali nitrate salt mixtures. Various mixing rules were fit to these properties.

The results of these studies suggest that accurate melting points are a sensitive test of force field accuracy. Also, powerful molecular simulation methods are capable of computing properties useful in the design of fluids targeting a particular application. In addition, the thermodynamic integration-based procedure is modified to compute solid phase free energies which is used to calculate solubilities of solids in liquids. Enthalpies of vaporization of ionic liquids were also computed and this data will be used to verify vaporization enthalpies measured experimentally.