The Bible as Inspired, Authoritative, and True according to Saint Augustine 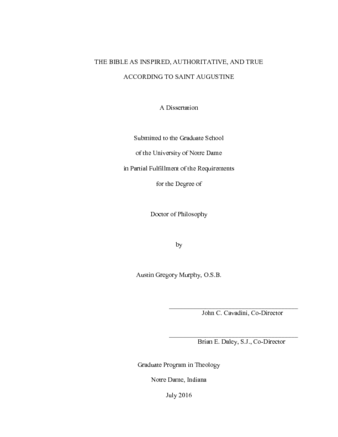 Rather than investigate Augustine’s thinking on these matters within the modern framing of biblical inspiration, this study does so in the context of the saving dynamic of faith seeking understanding. Augustine’s thinking about the inspired texts is best examined from this context.

This study finds that for Augustine faith in the Bible as inspired, and therefore as authoritative and true, is a crucial component in the believer’s saving journey to God through the purification of one’s loves and in an increasing participation in God’s wisdom. This faith is put in the Bible as an authority alongside the authority of Christ and that of the Catholic Church. Within the Christian system of these three authorities, the biblical texts mentor believers in wisdom, mediate the divine wisdom, teach purification, and impart the correct knowledge of how to “use” temporal things, so that God is attained. Indeed, the meanings of the biblical texts can be considered right judgments that, when appropriated by believers, are passageways into an ever greater participation in the wisdom within which God is loved and “enjoyed.”