Palace of Industry, Amsterdam: Detail of center of facade 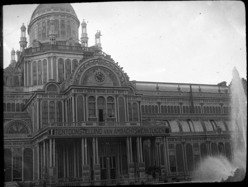 Part of a city plan formulated by Amsterdam physician Samuel Sarphati after he visited the Great Exhibition of 1851 in England. A “Palace of Industry” built for the Exhibition of Arts and Industry, Amsterdam, which opened in 1864. Modeled after the popular Crystal Palace in England, the building was called the “Crystal Palace at Amsterdam” in the Illustrated London News. The exterior was illustrated in 1861, the interior at the opening of the Exhibition was illustrated in 1864. Nadar’s balloon was launched from here in 1865, an event in early photography.