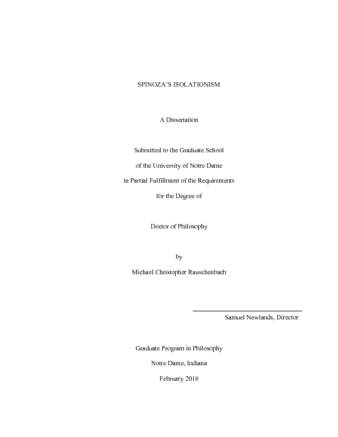 This project coalesces around a simple but highly counterintuitive claim forcefully emphasized by the 17th century Dutch rationalist, Baruch Spinoza. Following others, I call it the explanatory barrier between the attributes (EB), and I suspect it may be true. My aims here are far more modest than establishing the EB’s truth, however, for fairly strong critical consensus in Spinoza scholarship suggests that Spinoza did not have, and that there really could not really be, any good reason for believing it. That claim is certainly false, in both respects. This project is my attempt to uncover what Spinoza’s reasons might have been and to show that they are compelling.

The dissertation’s latter half uses this argument to defend what I call Spinozistic Isolationism: Spinozism, plus a compelling justification for the EB. I claim that Isolationism strongly undermines interactionist dualism, accommodates the best arguments for physicalism while retaining key advantages over it, and can be interpreted as either a form of or very nearby rival to Russellian panpsychism. I think the argument given here for the explanatory barrier helps justify Spinoza’s basic metaphysical project. So justified, Isolationism deserves serious consideration as the most compelling route towards resolving longstanding debates in the metaphysics of mind.