Church of Saint Walburga: Exterior detail, with the belfry in the distance at right 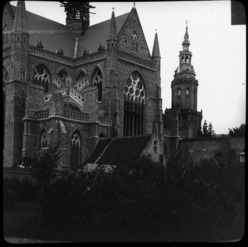 The city was founded by Baldwin I of Flanders around 870. Portions of St. Walburga’s relics were taken to Cologne, Antwerp and Furnes in 893, at which time the first chapel was begun. The present church was begun 1230-1238. Only the choir, two bays of the nave and the base of the tower were completed. The deep foundation of the tower was used subsequently as a water reservoir (cistern, known as the Citerne) for domestic and firefighting water; this is now part of a city park. Saint Walburga housed a chapter of canons. The neo-Gothic transept was not completed until 1907.