Politics and the Flight from Honor: Homer and the Human Good 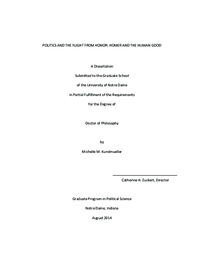 The love of one’s own and the love of honor lead, depending on which is most highly desired, to prioritization of either the private and domestic or the public and political and are thus often in tension with one another. Homer’s epics, which served as the foundation of Greek literature and the richest of literary resources to Plato, Aristotle, and the writers of Attic Greece, set before us these two desires, their consequences for individual citizens, and their political excellences and dangers for the view of ages to come. The observation that the love of one’s own and the love of honor are powerful political forces is thus not new; but much less is it outdated. As the Federalist Papers demonstrate, the Framers of the United States Constitution recognized the power of both these passions, and Alexis de Tocqueville would later note the importance of the love of one’s own as he observed its expression in family, marriage, and the domestic sphere of American life.

Yet the relevance of Homer’s portrayal of the tension between these passions has been largely ignored within political theory. Recent interpretations of ancient Greek literature and Homer, among them Hannah Arendt’s The Human Condition, predispose contemporary readers to overlook aspects of Homer’s poetry which detail the place of love of one’s own and private life within the Iliad and the Odyssey. This dissertation brings Homer’s complex vision of the relative value of and interplay between the love of one’s own and the love of honor to bear on enduring questions about politics, justice, and the meaning of human life. I argue that Homer portrayed the love of one’s own as praiseworthy rather than as a source of injustice or merely associated with the basest necessities of human survival. Homer’s portrayal of Odysseus, a hero whose greatest accomplishment is reunion with his family and household, emphasizes the importance of love of one’s own family and home as a politically stabilizing force.