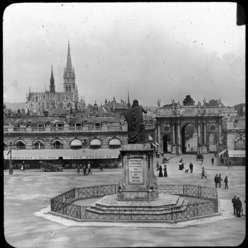 Héré de Corny was court architect to Stanislaw Leszczyński, Duke of Lorraine and former King of Poland at his capital of Nancy (reigned 1738-1766); famous for the harmonious suite of axial spaces he developed, extending from the Place Stanislas to the Palais du Gouvernement; the sequence is a prime example of eighteenth-century urbanism. The square was a way to link the medieval old town of Nancy and the new town built under Charles III. It was also a place royale to honour Stanislaw’s son-in-law, Louis XV. The four corners and west and east sides of the square feature gilded wrought iron gates and lanterns, created by Jean Lamour (1698–1771). The northwest and northeast corners also feature ornate fountains designed by Barthélémy Guibal (1699–1757). An Arc de Triomphe by Héré stands in the centre of the fourth side, leading to the adjoining Place de la Carrière. All three squares are included in the UNESCO listing.