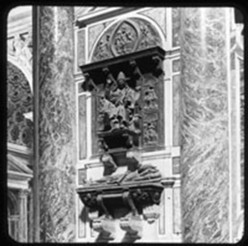 The monument is the most ancient papal monument in St. Peter’s Basilica, Rome. It is the work of Antonio and Piero Pollaiuolo, completed in 1498. The monument is made up of two parts: an effigy of Innocent VIII lying on his tomb and an image of him seated on a throne. In the latter, the pope holds the metal tip of the lance that pierced the side of Christ, one of the many holy relics that the basilica houses.