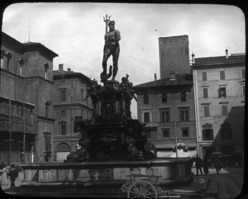 Three years after the competition for the Fountain of Neptune in Florence, the authorities in Bologna approached Giambologna to make a statue of Neptune and many subsidiary figures and ornaments for a fountain designed by Tommaso Laureti that they were erecting in the centre of their city. The young sculptor’s full powers seem to have been released in the making of this Fountain of Neptune (completed 1566). At the feet of Neptune are four boys struggling with dolphins, which spout water, interspersed with grotesquely puffing heads of childlike wind-gods, also spouting water. At the four corners of the pedestal below are four sensuous figures of Sirens, with bulbous curving fishy tails for legs, expressing water from their full breasts into the basin below. In between are many grotesque masks and shells articulating the several smaller basins.