Church of the Carthusian Monastery of Miraflores: Exterior side view of the church within the monastery walls 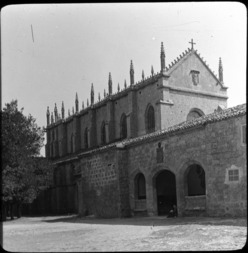 Around 1440 Bishop Alonso de Cartagena (reigned 1415-1456) brought Juan de Colonia to Burgos. He worked at the cathedral and in 1454 began the church of the Carthusian monastery of Miraflores, which lies 3 km east of Burgos. The church, with a single-cell, five-bay nave and polygonal, star-vaulted apse, was completed by his son Simón and consecrated in 1496. It contains the alabaster tombs of King John II of Castile (reigned 1406-1454), his wife Isabella of Portugal and their son Alfonso (died 1468). Both the tombs (begun 1489) and the magnificent high altar retable were the work of Gil de Siloé, the father of Diego de Siloé.