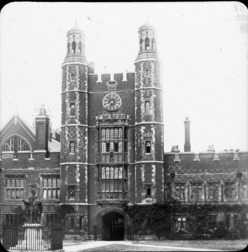 Eton College, often referred to simply as Eton, is a British independent (“public”) school for boys aged 13 to 18. It was founded in 1440 by King Henry VI as “The King’s College of Our Lady of Eton besides Wyndsor”. The brick gatehouse of the east range of Schoolyard (west range of Cloister) was begun in the 1440s but finished by Lupton in 1517-1520. The clock is 18th century as are the open crowning lead cupolas above the polygonal turrets. This was an early use of brick in a royal commission and made it a fashionable building material, especially for college buildings.