Opposition at the Margins: The Erosion of Democracy in Latin America 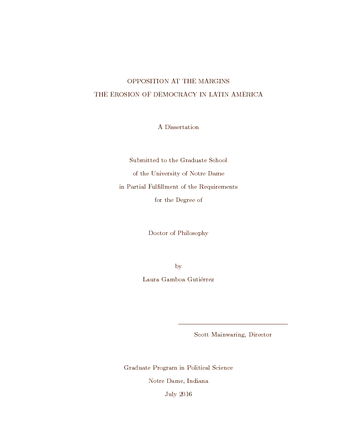 In the past decade democracies across the world have eroded. Democratically elected presidents have used their popularity to introduce constitutional amendments that over time destroy the system of checks and balances and hinder free and fair elections. Some of these presidents have eroded democracy. Despite similarities, others, however, have not been able to do the same. Why some presidents are able to erode democracy while others are not?

In order to answer that question, I conceptualize the erosion of democracy in two stages. The first focuses on the likelihood of electing presidents with hegemonic aspirations. The second focuses on the circumstances that allow or prevent these presidents from eroding democracy. Using a dataset with information on constitutional amendments introduced by democratically elected Latin American presidents, I show that economic crises, inchoate party systems, and weak states increase the likelihood of electing hegemonic leaders, but cannot predict whether they succeed or fail in their attempts to erode democracy.