The Political Economy of Common Goods 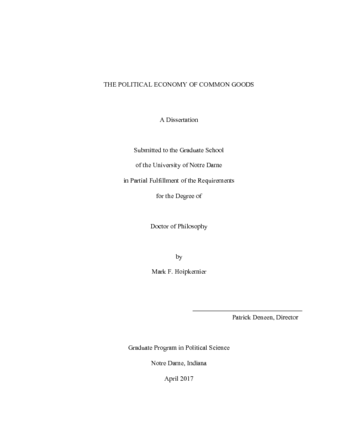 The best account of the common good defines it as the just flourishing of a community qua community. A community is an order of common, purposive action oriented to some vision of its own flourishing. We can ask of any community, first what its common goal is, then whether this is just, and finally whether a given act or state of affairs serves that just goal. The roots of this modest view are in Aristotle, who uses the common good as a standard of political justice that is less demanding than complete virtue. Even though the regime he calls “polity” does not center on full human virtue, it shares the benefits and burdens of political life in a just way among the rich and poor and is thus judged to be for the common advantage.

As usually reckoned, liberal institutions do not need or refer to the common good, because of the primacy they give to individual rights or market freedoms over substantive purposes. But, self-description notwithstanding, if a given political or economic institution turns out to be an order of common action, then it is per se oriented toward some common end and should be evaluated by the standard of common good.

This study applies such reasoning to three kinds of association that dominate contemporary public life: liberal polity, the market, and the business corporation. Liberal polity and corporations are themselves types of common action. Like all communities, they wield authority, confer honor, and need solidarity or friendship, and could not do otherwise. Both emphasize the private (rights and profit), but this is different from simple absence of common action, in which case private ends would predominate by default. Market relations, by contrast, are not common action; thus the common good does not show up in markets unless we regard them as instituted by some larger community.

Even in aspects of liberal politics and economics that may not seem to concern the common good, the concept proves indispensable to sound deliberation just because common goods are intrinsic features of any community.