Angkor Wat: Exterior staircase of the tower at the corner of the second-level gallery 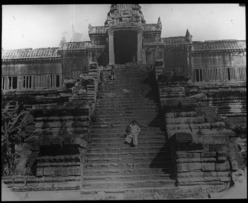 The second-level enclosure is 100 by 115 m. Three sets of steps on each side lead up to the corner towers and gopuras of the inner gallery. The very steep stairways represent the difficulty of ascending to the kingdom of the gods.