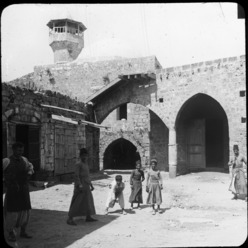 A small mosque near the old crusader castle. It still looks very similar in modern photographs, with a distinctive single minaret and courtyard. Prince Youssef Chehab [(Youssef Shahabi (1763–1788)] of Lebanon captured the city ca. 1780; the mosque is named for him. He also returned the Church of St. John to the Maronites. The city was ruled as an emirate within the Ottoman Empire by the Maan and Chehab dynasties.