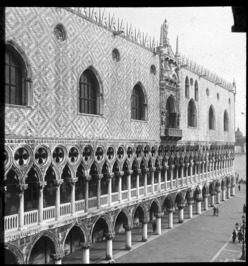 The balcony at the centre of this facade was constructed at the beginning of the sixteenth century in imitation of that on the waterside facade. Shows central window detail topped by statue of Justitia-Venetia. The winged lion is in the panel below.