Singular Self-Awareness with the Searcher of Hearts: Conscience in the Thought of Kant, Kierkegaard, and Barth 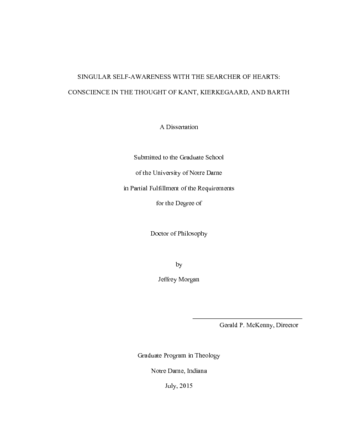 This dissertation examines and defends a theory of conscience as a person’s individual moral self-awareness before God. This understanding of conscience has been dismissed in the communitarian current of contemporary Christian ethics. And this is unfortunate, I argue, because it has a long and valuable history in the Christian tradition. This understanding of conscience has implicit warrants in the Old Testament and explicit precedents in the New Testament, in the patristic era and beyond. Surprisingly, this understanding of conscience is upheld in modern theology and philosophy through the work of Immanuel Kant, Søren Kierkegaard, and Karl Barth. I argue that Kant, Kierkegaard, and Barth each make a persuasive case for conscience as the means God gives to each of us to know ourselves in our singular accountability before God. Influential critics discern in this theory of conscience, by virtue of its association with Kant, the origins of a modern moral subject who knows herself as accountable before a law simply because it is the law she has given to herself. But I argue that for Kant, Kierkegaard, and Barth conscience is where we strive to approximate God’s knowledge of our character before God as God makes a claim upon us. Conscience as moral self-awareness is not—at least not in the tradition these three figures uphold—a license for an atomistic, autonomous individual who creates her own morality and values freedom for its own sake. It is, rather, a source of self-awareness for the individual in her singular relation to God. I conclude that these three figures helpfully remind us of this biblical and theological witness that we know ourselves rightly when we see ourselves through the eyes of the one before whom we are fully transparent.