Mont-Saint-Michel Abbey: Detail, relief carving of the four Evangelists, with their attributes 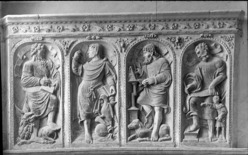