Sewu Temple: One of the giant guardians guarding the front of Candi Sewu 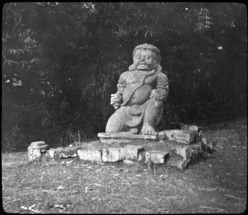 Sewu is an 8th-century Buddhist temple located 800 meters north of Prambanan in Central Java. Candi Sewu is actually the second largest Buddhist Temple in Central Java after Borobudur. It is a complex of buildings consisting of a principal shrine and 250 subsidiary temples arranged in concentric squares around it. The shrine is probably the sanctuary referred to in the Kelurak inscription, which records the founding of a temple in 782. Another inscription, found inside the temple precinct, states that the temple was enlarged in the year 792; the same inscription gives the name of the candi as Manjusrigrha, i.e. a shrine dedicated to the bodhisattva Manjusri. The main temple is in the Early Classical style. Each of the entrances were guarded by twin Dvarapala statues.