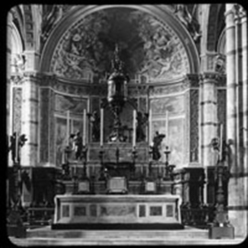 A Roman Catholic church. A church existed on the site by the 12th century but it was rebuilt and enlarged in the 16th century. The Baroque façade was built in 1613 and the bell tower completed in 1738. The Loggia del Papa, adjacent to the church, is a 15th-century Renaissance architecture, open-air arcade.