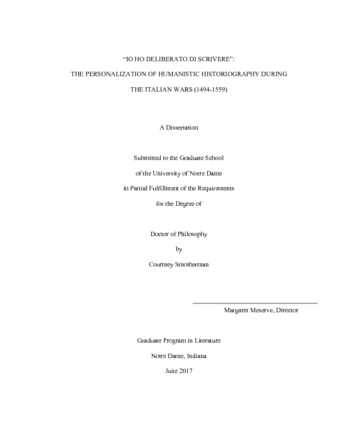 My argument is that humanistic historiography did not die out in the Italian Wars, nor was it superseded by a return to the medieval past or a swift jump to modern historical methods. Authors of War-era histories were forced to confront new events, circumstances that had no recent or classical precedent and adapted the humanistic history to their new context by inserting themselves and their personal views into their histories. Using historiographical works by Pietro Bembo, Paolo Giovio, and Francesco Guicciardini, I argue that the humanistic history survived the Italian Wars by becoming more intensely personal.

These authors used their own experience in and knowledge of the Wars to modify the traditional form of humanistic history to something that could narrate and explain the traumatic events between 1494 and 1559. Interweaving all three authors across four chapters, I analyze the formal characteristics that make these war-era histories humanistic, the increasingly personal judgments each offers on the states and rulers engaged in the Italian Wars, the presence and effects of those Wars on the authors, and their own personal experience in the Italian Wars that is reflected in their histories. In my final chapter, I look at the post-War work of Angelo di Costanzo to demonstrate that these personalization techniques were also put to use by post-War historians to write humanistic histories of their own.