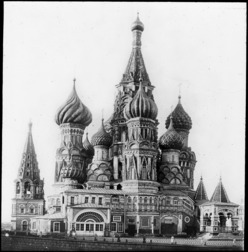 In 1553-1554, at the command of Ivan IV (reigned 1533-1584), the stone church of the Trinity on the Fosse (Troitsa na Rvu) was built in Red Square to commemorate the capture of Kazan. It had seven wooden chapels. In 1555-1561, however, the new brick cathedral of the Protective Veil on the Fosse (Pokrov na Rvu), attributed to the architects Barma and Postnik, was built with eight stone chapels symmetrically arranged on a common foundation around this central part. Another chapel was built in the north-east corner over the grave of the ‘holy fool’ of Moscow, Basil the Blessed (Vasily Blazhenny), in 1588, since when the cathedral has been popularly known by his name. At this time the free-standing bell-tower at the south-east corner of the building was erected. The ornamented domes over the chapels were added in 1593. The church’s astonishing appearance symbolized a heavenly Jerusalem embodying in its forms the idea of the church-city, and to a large extent governed the original conception of the church as a multi-chapel creation.