"Rebuild My Church": Peter Damian Fehlner's Appropriation and Development of the Ecclesiology and Mariology of Vatican II 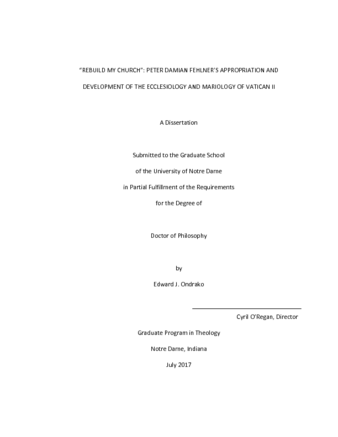 “Rebuild My Church” is the template drawn from the experience of St. Francis of Assisi in prayer before the crucifix of San Damiano in 1205 which Peter Damian Fehlner redeploys for the twenty-first century. By the gift of grace, Francis understood his call to conform to Christ and his eschatological task to rekindle the love of the faithful for Christ. By doing this, not only would Francis rebuild the Church, but labor to convince society of charity and holiness as integral to one’s relation with God and what it means to be saved. Modern secularism, the option to make finite autonomy the heart of happiness, may view this as the inconvenience of inconveniences, but Fehlner’s new direction in Franciscan theological, philosophical, and anthropological thought amplifies this “Ur-experience” of Francis and links it to Vatican II as irreplaceable.

The Role of Charity in the Ecclesiology of St. Bonaventure (defended 1959, published at Rome 1965) is Fehlner’s ground breaking doctoral dissertation, the foundation of his intellectual and spiritual development. The mystery of the whole Christ is perfected in the mystery of charity as bond that unites heaven and earth and inserts the human family [global family] into the mystery of the Trinity. Fehlner develops this Franciscan understanding of the mystery of Christ, the Holy Spirit, and Marian mode of Franciscan theology and metaphysics. The Augustinian-Bonaventurian theory of divine illumination and metaphysical exemplarism provides coherent metaphysical and epistemological grounds to avoid fideism and rationalism. Bl. John Duns Scotus offers a “reformulation” in the so-called Franciscan thesis: the absolute primacy of Christ has a metaphysical shadow in the scotistic teaching on the univocity of being and radical sacramentality of creation in the Christian order of salvation. Mary’s freedom is part of human freedom for everyone but her freedom is fully exercised in itself and ontologically more suited to choose the good given by God in Christ. For Duns Scotus, only God can conceive of a perfect Redemption better than which none is possible or can be conceived. Mary has a double mediatory role: with Christ, the Redeemer, on our behalf within the economy of salvation, and with God the Father in view of the Incarnation and praise of God in the perfect sacrifice of her Son. The Victim is not abandoned by the heavenly Father or Virgin Mother at the moment of consummation. For St. Maximilian M. Kolbe, a scotist, Mary is, by the will of the Father and through the foreseen merits of his Son, the Spouse of the Holy Spirit, or Immaculate Conception.

Fehlner analyzes from a scotistic perspective what Bl. John Henry Newman himself said about his life and writing. Questions about the object of the intellect and unity of knowledge and theology in the university curriculum occupy Newman. The relation of science and wisdom, the character of the power to know and power to will, each a perfectio simpliciter simplex (simply simple perfection), and two affections that define the will as pure perfection and as, in fact, finite perfection: the affectus justitiae (affection for justice) and affectus commodi (affection for happiness) are scotistic tools. Fehlner’s original and parallax view explains Newman’s personal experience of the development of doctrine along a scotistic path. Newman’s use of metaphysical attributes without any formal training in scholasticism, nor exhibiting any desire to do so, nor ever catching up with it, makes Newman’s approach interesting. His focus on intellectual excellence and the genius of Christianity was diverse, identifiable along patristic lines, and he employed convincingly the argument from the convergence of probabilities inspired by Bishop Butler. Fehlner is unique in analyzing the “metaphysics” in phenomenological form that underlies Newman’s journey of faith and desire for holiness. Unfolding of the mind and preparation of heart, pivotal principles for Newman, applies to each Christian and the Church itself, as Pope Benedict XVI confirmed to the Roman Curia in 2005.

The precise question of this thesis is Fehlner’s understanding of his renewed theology as an appropriation of the Franciscan School in the service of the twenty-first century Franciscan reading and development of the ecclesiology of Vatican II and why he thinks a developed Mariology can contribute. Christ is the one teacher of all and Mary is teacher-witness. From the pre-scotistic theological formula placed on the lips of Francis, quem amor humanavit (whom love had made man), to Bonaventure’s Trinitarian thought and theory of divine illumination, Christology, Mariology, and metaphysics, Fehlner explains how Duns Scotus completes Bonaventure with the absolute primacy of Christ and the Immaculate Conception, the disjunctive transcendentals, and metaphysics of univocity underlying both. It is not pretended that a systematic ecclesiology and Mariology after a modern model has been discovered, but Fehlner’s theology is more than a witness to the Franciscan tradition. To the extent that one can discover the Franciscan key to the ecclesiology and Mariology within his thought, Fehlner is a witness to a developing theology of the Church.

Fehlner recovers Newman as a religious thinker whose contribution to the central issue of the development of doctrine facilitates a linkage with the Franciscan masters. Newman’s preaching, as Anglican and Catholic, supported principles for imaginative, conceptual, and practical renewal first in the Anglican Church and then Roman Church of the nineteenth century. Newman’s perspective on theological tradition was plural. He articulated and demonstrated the inflections in the development of doctrine. Since Newman is often called absent father at Vatican II, Fehlner treats many aspects of how Newman engages the contest of modernity. This makes Newman, in Fehlner’s eyes, at least an honorary Franciscan, but far more, for the real issue is to rebuild the Church attendant on the priority assigned to charity and a holy life. Newman excels on this oft-overlooked fact. Nowhere else in contemporary Catholic theology is there a metaphysician-theologian who is clearer in linking Franciscan and Newmanian interests than Fehlner. Nor is there a more forceful rendition of the Marian-Christological vocation of St. Francis of Assisi and his theologian followers.

Fehlner is a constructive theologian in his own right. This thesis argues that Fehlner’s works confirm and amplify his dissertation that the life of the Church is a stage in the realization of Christ’s kingdom in heaven and in the world because the social dimension of redemption pervades every facet of Christian experience. Although he does not use the term “global fraternity” specifically, Fehlner’s contributions are consonant with the direction of the documents of Vatican II, Pope St. John Paul II, Bl. Pope Paul VI in Populorum Progressio, and its reaffirmation by Pope Benedict XVI in Caritas in Veritate. Fehlner’s Franciscan thinking is a treasure trove for new Franciscan research on analyzing the positive and negative principles affecting global fraternity. His original approach underscores the Marian-Christocentric vocation of St. Francis, the first systematic form to his life by St. Bonaventure, and the revisions by Bl. John Duns Scotus. Holiness is the standard bearer of what Christianity is and gives ingress to its apocalyptic and counter-cultural dimension. Understanding the saints leads to respect for the vast diversity among equals with the same freedoms and rights. The going forth of all creatures from God, especially those with intellect and will, through Mary, find the initiation of their return to the Father.