Bakong: Two of the brick temple towers before restoration 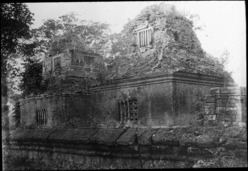 Between the two moats there are the remains of 22 satellite temples of brick. The innermost enclosure, bounded by a laterite wall, measures 160 meters by 120 meters and contains the central temple pyramid and eight brick temple towers, two on each side.

The two most important extant 9th-century Hindu monuments built before Yashovarman I moved the capital to Angkor itself are Preah Ko and Bakong, which were founded by his father Indravarman I (reigned 877-889) at Hariharalaya. Just to the south of the Indratataka reservoir (Loley Baray), he dedicated a temple, Preah Ko, to his ancestors. Finally, he constructed to the south of Preah Ko a personal temple, the Bakong, in which to continue the cult of the devarāja. The Bakong, built to contain Indravarman I’s royal liṅga Indreshvara and dedicated in 881, is extremely important as the first reasonably complete temple-mountain. The site later became Theravada Buddhist.