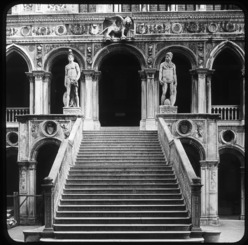 Designed by Antonio Rizzo between 1483 and 1485, the sculptural work on the staircase was finally completed in 1491. The name comes from the two colossal stone statues of Mars and Neptune by Jacopo Sansovino, which were erected on the upper parapet in 1567.