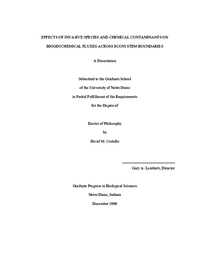 Ecosystem functions, which drive global cycles and provide services to humans, can be influenced by losses and gains of nutients, detritus, and organisms from beyond an ecosystem’s boundaries (i.e., resource subsidies). Anthropogenic disturbances, such as the transport and release of invasive species and chemical contaminants, can disrupt the functioning of ecosystems and I examined how these stressors caan influence the flux of resources across ecosystem boundaries. Ionic liquids (ILs) are a novel class of chemicals with great potential for industrial use yet they /may pose a threat to aquatic habitats. I found that certain ILs reduce zebra mussel feeding at concentrations well below lethal levels, which, if ILs are released into an invaded lake, may alter the flux of resources from pelagic to benthic habitats. European earthworms, which have been introduced to historically earthworm-free North American temperate forests, can reduce forest biodiversity and alter nutrient cycling. I demonstrated that non-native earthworms can also increase the flux of nitrogen from riparian soils by both increasing nitrate leaching and stimulating microbial denitrification. Additionally, non-native earthworms may alter the flux of detritus into soil food webs by consuming leaf litter at a high rate and producing nutrient-enriched feces. Finally, I present evidence that non-native earthworms may be spreading to new riparian habitats by using stream ecosystems as corridors of invasion. To control how chemical contaminants and non-native species negatively affect ecosystem functions, we must understand that seemingly separate ecosystems can be connected through resource subsidies and, thus, the impact of stressors can move across ecosystem boundaries.