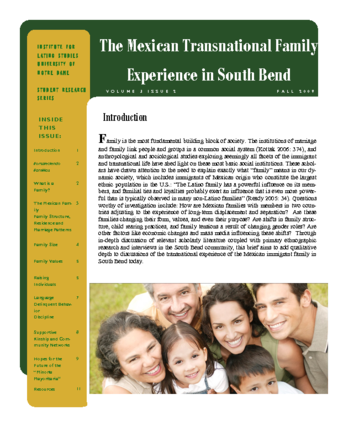 Looks at changing definitions of family within Latino families, including an erosion of gendered roles in Latino homes and a shift toward more traditional nuclear families separate from traditional Mexican tendencies to live among extended family members after marriage. Study is based on interviews with various immigrant couples from D.F., Mexico at La Casa de Amistad in South Bend, IN. Findings indicate a strong focus on collectivism, respeto, and confianza among married couples in the U.S. Additional findings include a decrease in traditionally large Mexican families due to urbanization and a change in how children are raised in the United States in comparison to Mexico—including an emphasis on the individual, different types of discipline, and increased educational and socio-economic opportunities for children.