Wat Arun Rajwararam: Detail, one of the four satellite prangs and terrace surrounding the central tower 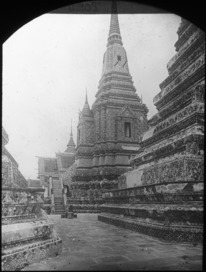 There are four steep stairways, one on each side, leading to three terraces, with four smaller prang at the corners and pavilions at the base of the stairways. The form is held to be a representation of the five peaks of the sacred mountain, Mt Meru, centre of the universe and abode of the gods. The ashes of King Rama II are buried in the base of the Buddha statue.

A Buddhist temple (wat) in the Bangkok Yai district, on the Thonburi west bank of the Chao Phraya River. The full name of the temple is Wat Arunratchawararam Ratchaworamahawihan. Thonburi was the Thai capital for 15 years between the sack of Ayutthaya in 1767 and the establishment of the royal court at Bangkok in 1782, during which period the temple was built. Its restoration was undertaken in 1785 and included the enlargement of its most significant feature, a Khmer-style prang (tower-sanctuary) 81 m high . The building rests on piles sunk in the river bank. There are four steep stairways, one on each side. The prangs are decorated by seashells and bits of porcelain which had previously been used as ballast by boats coming to Bangkok from China.